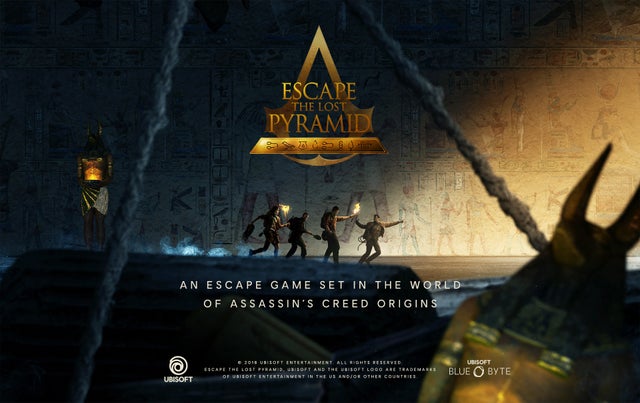 ESCAPE THE LOST PYRAMID (ASSASSIN’S CREED) Escape The Lost Pyramid is not a video game. It is an escape game experience set in the world of Assassin’s Creed Origins in virtual reality.

You will experience a larger-than-life adventure as if you were there, in 1928, in the gigantic pyramid of Nebka. Never alone, as part of a team (of 2 or 4), you become the hero and experience in total safety situations that would be far too dangerous or just impossible to live in real life.

Developed by Ubisoft Blue Byte, it is the next generation of social virtual reality experience.

Welcome to the Animus.

February 1928. An expedition led by Sir Beldon Frye disappears somewhere in the Sinai Peninsula. A team of four and a dozen indigenous porters. They were looking for the Lost Pyramid of Nebka... Or more precisely "something" that should have been there. They were never seen again.  Using the simulation reconstructed from their DNA memory, your team will put themselves in the shoes of the explorers.

Find out what happened to the expedition. And more importantly: locate what they were looking for.

Add to Cart
​All major credit cards accepted.  Please refer to FAQ’s and policies page regarding re-scheduling or cancellation policies.